Variations on a theme; or: synthesizing snowf*akes; or: unsupervised learning at Zoom University

Snow and snowflakes have been on my mind lately. This is not entirely because of the storm in Texas — rather, I have been thinking since Christmas about the snowflake’s shape: those small, delicate, spiky circles we all know so well (err, perhaps there is something of current events here after all…). This is a blog post about snowflake shapes.

What shape is a snowflake? In principle, we all know what snowflakes look like. We can all imagine the six-fold symmetry, and then we can imagine the embellishments. And yet— not so fast! As a little child I (and I do not think I am alone in this) wanted to see the shape of a snowflake for myself. Of course, I never quite could — at least, to the point where I could stuff and saturate my eyes — because the delicate snowflakes melted away as soon as my snow-blind eyes could focus on the crystal caught. Think about it, then: where does your own conception of snowflake-shape arise from? Does it come from firsthand experience, or from clip-art and wintertime papercrafts?

(Of course, there is something to be said for indirect inference of snowflake-shape. Years later, I would marvel at the fact that you could infer that snowflakes are hexagonal from the existence of 22º haloes, a kind of crystallography at the heavenly scale, linking the macroscopic and microscopic. For now however I am concerned with seeing directly, and face to face, with a presence and visual immediacy that cannot be afforded by imagination alone.)

This is no small concern. A year or so ago I visited the California Academy of Sciences and learned about Wilson Bentley, the first man to photograph a snowflake. This was on January 15, 1885; he was just shy of 20 years old. To appreciate this moment, you have to imagine a time before January 15, 1885, when no such photograph existed. Until Bentley’s innovation, no man had seen a single snowflake for more than a delicate glimpse. Perhaps spatially the snowflake could be magnified under a microscope (as Hooke and his contemporaries demonstrated in the 17th century), but how could anyone magnify it temporally? Bentley’s Edgertonesque miracle — akin to Muybridge’s “horse in motion,” captured just seven years earlier — is to hold still the moment to reveal more — to give us the opportunity to gaze without urgency. Dare I say, Bentley freezes time? The manipulation of time becomes an act of unconcealment, and then furthermore an act of creation. Bentley’s snowflakes outlived him, and they will outlive me.

Wilson Bentley was not a scientist by training, and perhaps that served him well. Over the course of his life he collected over 5,000 images of what he called “ice flowers.” There is something marvelous about this devotion, which spanned years and years, crystal after crystal, wonder undiminished. Surely the 5,000th snowflake brought Wilson as much delight as the 4,999th (and surely it is the case that you know you are in love when you find yourself falling in love afresh every day).

There is also something to the uniformity of Bentley’s collection. Each snowflake is framed carefully in the center of a slide, on a black background. The images are diligently cropped to squares. See for yourself! The University of Wisconsin-Madison hosts an online archive of 1,181 of Bentley’s images, courtesy the Schwerdtfeger Library. Bentley never sought copyright on his images; they are in the public domain, and so I downloaded them, along with their labeled categories. The categories have wonderful names, such as “crystal with broad branches” and “lumped graupel.”

When displayed in a grid, the snowflakes look like a box of delicious holiday sweets. Surely these delights are made of sugar and not ice. 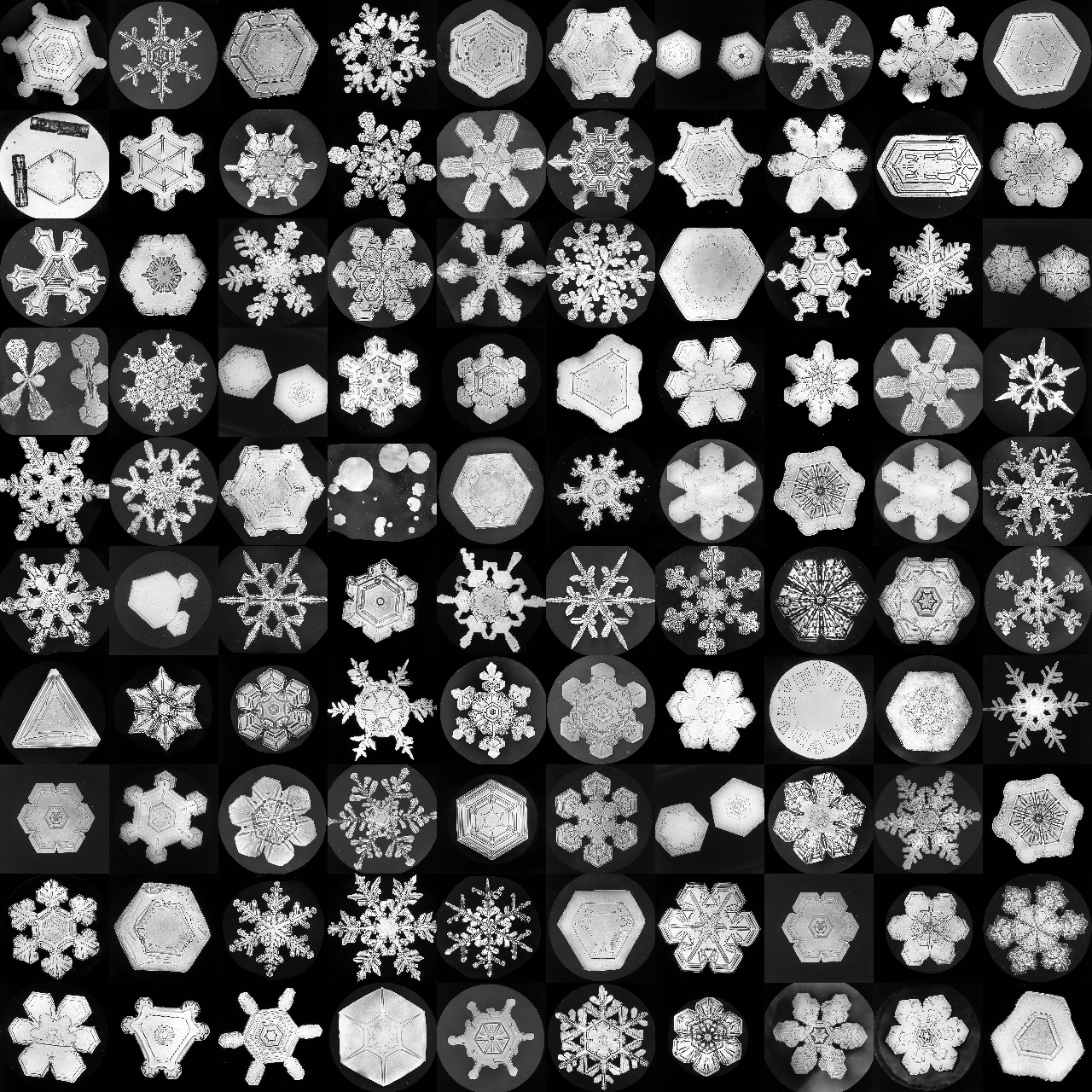 What does one do with 1,181 snowflakes? One searches for patterns, the way Bentley would never have been able to. Bentley’s images demand to be studied as samples from a distribution, and they are strikingly well-suited to our favorite statistical computer vision techniques. For example, though they are scanned at a uniform 1000x1000 resolution, they still make sense when dramatically downscaled, even to as low as 32x32. Notice also how the snowflakes are highly amenable to data augmentation on account of their intrinsic symmetry. Each snowflake can be reflected and rotated arbitrarily to produce several more high-quality synthetic snowflakes “for free.” So, even though there are nominally 1,181 unique images, there is much more juice here than one might expect at first. You can’t always play this game: CIFAR images can’t really be rotated, and most MNIST digits can’t even be flipped. But snowflakes are snowflakes.

One February evening I trained — with a lot of help from my friends Gautam and Jack — a baby variational autoencoder, which embeds the snowflakes in a small low-dimensional latent space. Here, “low-dimensional” means 10-dimensional: it seems very reasonable to encode 2^10 data points with 10 parameters. In the image below, the top row consists of five randomly-selected source images, and the bottom row is the VAE’s attempted reconstruction. The contrastive green-and-purple colorscheme comes from matplotlib’s default, and reminds me of the delightful pGLO experiments we did in high-school biology.

Of course, as with all things deep-learning, this was easier said than done. For a technique that falls broadly under “unsupervised learning,” a VAE requires an awful lot of babysitting! —but then again, one of the joys of online school is that nobody can tell if you’re training machine learning models behind your Zoom tab. So I trained, and I trained. The current model takes around 6 hours on my dusty old MacBook, though after the first 30 minutes the results are already non-embarrassing.

Do you want to build a snowgan? Separately, I also spent some time trying to build a model adversarially. The snowgan (so to speak) consists of two rival sisters: the generator, Elsa, is of the same architecture as the VAE’s decoder, and the discriminator, Anna, learns to distinguish Elsa’s output from real snowflakes. Elsa and Anna compete, and as a result Elsa gets better at camouflaging the fakes among the flakes. Alas, GAN convergence is finicky enough that I lost interest after a few days… open problem!

It turns out that the VAE’s decoder can be used to build a small-scale snowflake factory. Using ONNX.js and only a little bit of guile, I ported the VAE’s decoder to JavaScript and attached the latent space to some <input type="range"> sliders. By using the sliders to choose parameters in the latent space and feeding these parameters to the decoder, one can interpolate to hallucinate snowflakes that are not part of Bentley’s training set. With some experimentation, I found the sliders that correspond to parts of the latent space that map to outliers; those parameters I clamped to extreme values in the non-outlier-ey direction. This interface is what you see at the top of this blog post.

At time of writing, there is only one Google search result for “this snowflake does not exist,” which points to a 2017 master’s thesis in elementary-school education by Eli̇f Dedebaş. The context is an activity where children are making paper snowflakes, and investigating the relationship between the number of folds and the symmetries. One child creates a snowflake-like shape with eight-fold symmetry and is asked if she knows why such a shape is unnatural. Shape!

I imagine this slider infrastructure is on par with the sort of fancy tooling UI that they have up in the Great Snow Factory In The Sky. I’m reminded of David Wiesner’s wonderful Caldecott-winning picture book Sector 7, which I recall reading (“reading”) in my elementary school’s library. It is about a cloud factory, accessed from the top of the Empire State Building. Notice how the large sousaphone-bell-shaped openings emanating from the factory roof are exactly a portrait of an autoencoder’s decoder. 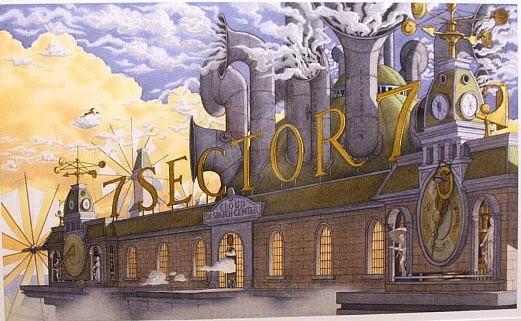 “Wiesner visited the Empire State Building on a zero-visibility day to research this book,” reads the About-the-Author at the end, “He was the only person there.” There is something of Wiesner in Bentley and Bentley in Wiesner, I think. Think of them both, and yourself, too, as Friedrich’s Wanderer. 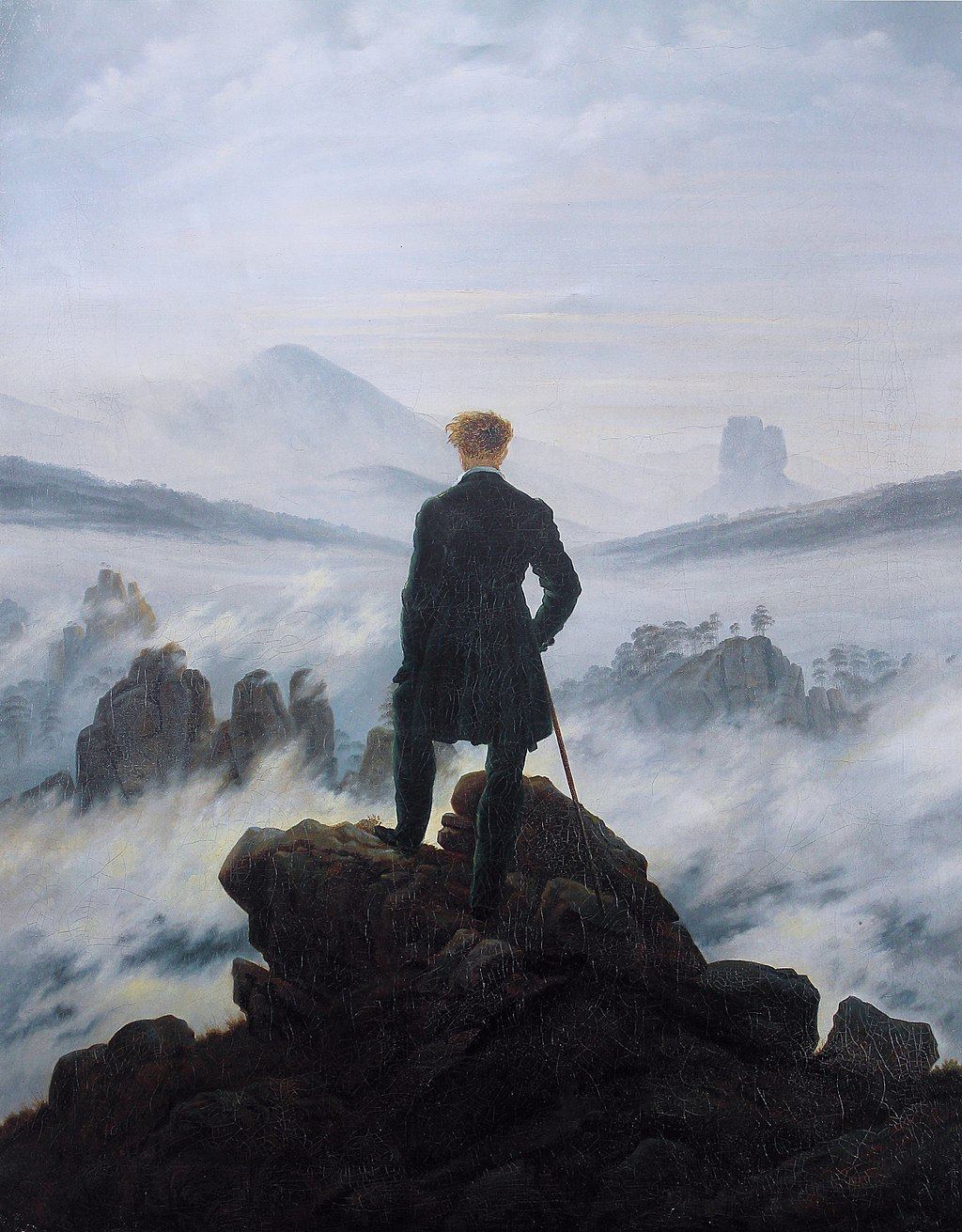 The results interpolated by the VAE are surprisingly convincing. Here are some snowflakes that do not exist (snowfakes?). I created these images by sliding the sliders haphazardly and recording a trace of the changing image. Often, people display this kind of interpolation in animated form, but in relation — and, indeed, deference — to Bentley’s life’s work, I would rather see them spread spatially than temporally.

I enjoy trying to work out the exact moment of transition between different kinds of snowflakes; there is a snowy saltation that occurs at certain boundaries that I cannot quite point you to. A curious fact is that a t-SNE plot in the VAE’s latent space shows no clustering with respect to the provided labels; the VAE seems to have hallucinated its own classification scheme, one which is perhaps more macroscopically morphological in nature than Magono and Lee’s 1966 classification scheme.

The BentleyBlizzardBlossoms (B3) dataset, along with some PyTorch utilities and the source code and trained model of the baby autoencoder, is available on Github. I think it would make a wonderful alternative to MNIST for small experiments. If you use it for anything, please let me know!