A couple of months ago, I was sitting at the dining table, and I caught myself staring at the lamp. And I had just finished reading about conics, so I immediately saw something awesome. Take a moment to think about it. Do you see it?

I saw that the pattern on the wall was very special. It belongs to a class of curves called hyperbolas. Let's see how that happens.

To start off, how does that lamp create a pattern on the wall in the first place? Well, one way to tackle this is to think about where the light is going. What parts does the lampshade actually shade, and where is there light? A clever trick here would be to get a smoke machine to create some smoke around the lamp. You can see where the the light is going in the smoke. It's fun, like a search beam (or the Batman sign).

Unfortunately, they don't sell dry ice to minors (partly because you can do really dangerous things with it, and partly because adults want to keep the fun stuff to themselves), so I did the next best thing: overkill. I created a model in Blender and simulated some smoke.

Sidenote: You haven't had a steep learning curve until you've tried to do something trivial with Blender. All the important functions are hidden away in various keystrokes, and there are all sorts of pitfalls all over the place. It's an amazing technology made with absolutely no consideration for beginners.

Rants aside, here's my snazzy modern Blender lamp with a funky lampshade and hardwood stem. Pretty, eh? It's just a sliced up cone (called a frustum) with a really bright divinely ethereal halo placed inside. I put a screen behind it to catch the projection. 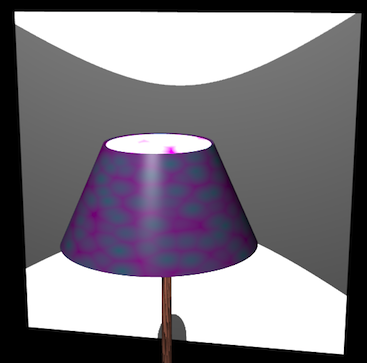 You can even see our mystery curve! Now let's blow around some smoke (easier said than done; Blender's smoke simulation takes a lot of Googling to get right). 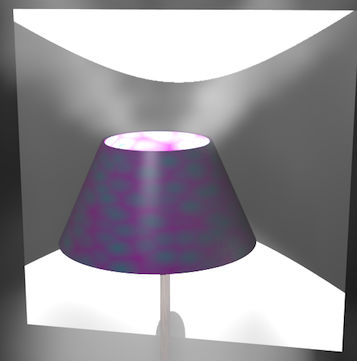 We want to find the nature of that curve, so we want to do some analytic geometry. Let's say our double-cone hourglass of illumination is centered at the origin. What equation describes a cone? Well, a cone is like several circles of increasing (or decreasing) size stacked above each other (like a pile of tires of different radii). For convenience, we can say that each circle's radius is equal to it's height above the origin. 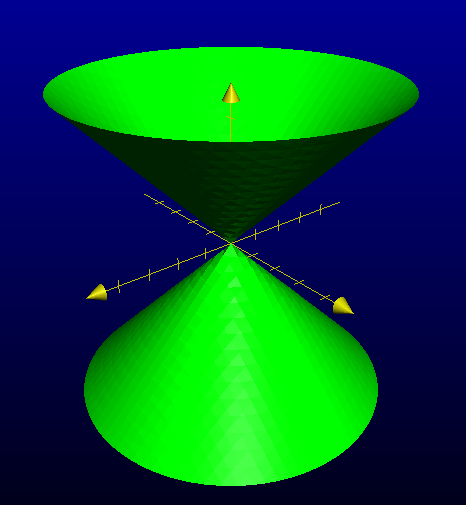 Note that we're doing several simplifications here, most importantly the width of the cone. We could have picked a narrower cone by squishing or stretching our equation, but this one is easy to deal with.

Now the screen: that's just a vertical plane. We describe that with $x=c$ for some constant $c$ (let's pick 1 for simplicity).

Wolfram|Alpha plots this for us.

That looks perfect. This is indeed the equation of a hyperbola you find in math textbooks (except simplified). So Result 1: When a vertical plane slices a cone, the result is a hyperbola.

Now we get to ask the magic question: what happens if…?. In particular, what would have happened if I had decided to play with the lamp and knocked it over? When you tilt the lamp, is it still a hyperbola?

If it's positive, then $m < 1$. We get an ellipse when the $x^2$ term is positive. When $ m < 1 $, the slope is flatter, or closer to horizontal. Notice how this plane will chop through just one of the cones, but all the way through. So, intuitively, you should get a stretched circle.

Ellipses show up all over the place. Planets orbit stars in ellipses (though this truth cost some scientists their reputation, and in some cases, lives).

Finally, that term can be 0 if $m=1$. That means the plane is parallel to the side of the cone. Think about how the intersection would look. It only intersects one of the cones, but the intersection doesn't chop all the way through like an ellipse. Removing that term gives us a quadratic equation, and the resulting curve is called a parabola. Parabolas show up when you're throwing things. Baseballs follow parabolic arcs in the air when you throw them.

There three curves are called the conic sections, and they are plenty of fun to study.