Everyone’s talking about an addicting new webgame that lets you try and land SpaceX’s Falcon 9 Lander.

Gizmodo says the game “will frustrate you no end”. GameSpot, TechCrunch, EnGadget, Popular Mechanics, The Verge and Popular Science seem to agree. The Twitterverse is forming conspiracy theories about SpaceX’s recruitment strategy.

But, as usual, everyone is missing the point:

SpaceX Falcon 9 Lander was probably written by a kid.

In their rush to sensationalize every little bit of news, all of these websites missed perhaps the most exciting bit of information. SpaceX Falcon 9 Lander was probably written by a kid.

Scratch, you see, is a programming language designed by researchers at MIT, intended to teach children how to program. I wrote some of my first lines of code in Scratch, when I was nine. I still frequent the site.

Here’s something you might not know: unlike just about any other popular Flash game, SpaceX Falcon 9 Lander is open-source. That means you can read the source code. Right now.

In fact, if you sign up for your free Scratch account, you can also change the source code, and publish your changes. You can make Mars Rover Lander by changing a few of the images that the game uses—Scratch has a built-in paint editor. You can twiddle some of the physics to make it easier or harder to win. You can embed a cheat code, and then take screenshots to post proudly on the Internet. 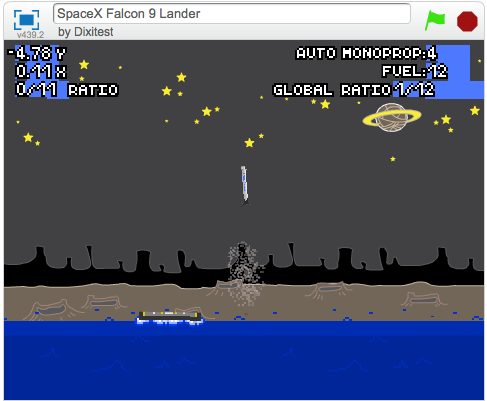 You can do all of these things right now, for free, with absolutely no technical knowledge. Assembling a program in Scratch is similar to putting together LEGOs: easy and intuitive. Left alone for an hour or so, your kids will figure it out on their own. In the process they will learn fundamental skills in math and logic that will show up again and again throughout their schooling and career. They will impress you.

Not convinced? Here’s what the code to play the sounds looks like. 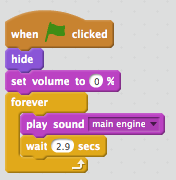 Someone who has never seen a computer before should be able to understand what that’s doing. That’s the beauty of Scratch.

In a society increasingly dependent on technology, it’s scary how few of us know how it all works. We’re breeding armies of muggles afraid of the handful who try to discover how things work. We’re imprisoning inquisitive schoolchildren and trying to “protect” the public with a war against “hackers”.

And it’s not going to change anytime soon. Of the over twenty thousand views the game has gotten, only nineteen people have bothered to look inside at what makes it tick.