So a notorious Scratch user, TheLogFather, posted a project where he compared two different ways to prepend to a list. Here they are, as both an image and as a pseudocode. 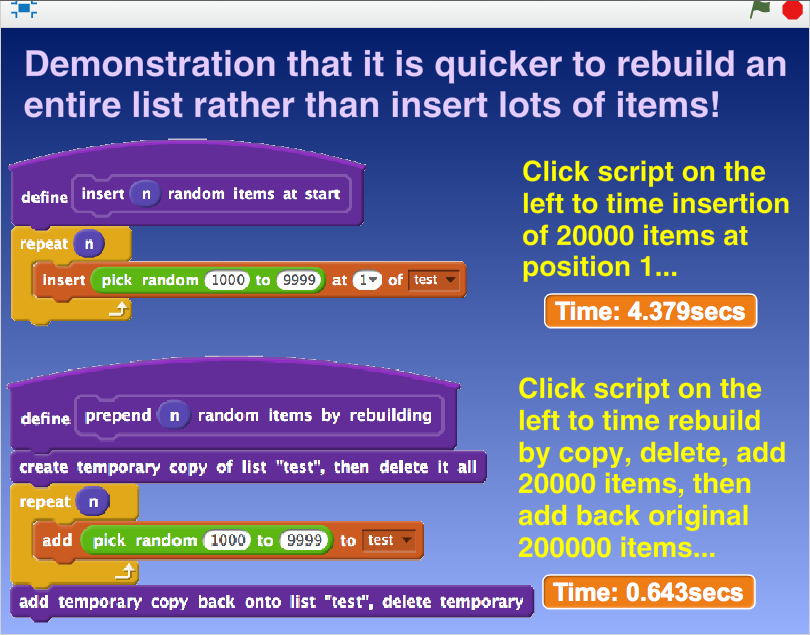 It should be pretty clear that the two are semantically equivalent, that is, that they will have the same net effect. However, notice that prepend2 uses only append instructions, while prepend1 uses the insert instruction.

Now, from a cursory look, prepend2 looks much slower: you are iterating over the initial contents of mylist twice when copying it in and out of temp.

Surprisingly, though, prepend2 is significantly faster. A quick speedtest on my MacBook Pro says that prepend1 takes 4.616 seconds while prepend2 takes a mere 0.724 seconds for 20,000 items.

Hopefully the reason why will be clear at the end of this blog post.

The first thing to do here is dig into the source and find the implementation of the insert and add blocks in Scratch. Scratch 2.0 is open-source and written in Actionscript. We find it all on Github. A little digging reveals the file src/primitives/ListPrims.as. This is where the list blocks are implemented. Looking around, we find the important sections:

Now, ListWatcher is defined in src/watchers/ListWatcher.as. We see that contents is an Array:

Let me say that again: in Scratch, a List is actually an Array. If this doesn’t bother you now, don’t worry, it will bother you soon.

ActionScript is an incarnation of ECMAScript, much like JavaScript. There isn’t much documentation about ActionScript’s VM, but there’s tons about how JS handles Arrays. So, though it’s not a completely legitimate assumption, I’m going to explain what’s going on based on how JavaScript does things.

When you run a computer program, at a sufficiently low level, you’re allocating some segment of the RAM for the program to access. The program basically treats this segment as a really long list, where each element has an upper limit on size.

It’s easy to store an integer (within limits) or a boolean value in memory, because it takes up just one cell of memory. But anything larger—a string, a list, an image, or a sprite—takes up multiple cells, and so you need a scheme by which those cells are allocated in an organized way.

In low-level programming languages like C, you have the malloc function that allocates the given amount of memory as a sequence of contiguous cells and returns the address of the first one. However, the catch is that once you’re done using that memory, you are responsible for freeing it (with the free function). Otherwise future calls to malloc will assume that you’re still using those addresses and pick some other addresses to allocate. Eventually you’ll run out of memory and things will start dying.

In higher-level languages (like ActionScript and JavaScript), the interpreter manages memory for you. You’re free to run around creating sprites and lists and mammoths and cows and whatever, and the interpreter destroys them when it notices that you’re done with them. This is called Garbage Collection, and is beyond the scope of this article (seasoned CS students will get that joke).

Now that you know how Arrays work, it should be obvious that inserting an element into an array is hard. Why? Well, there’s no space! Think of the RAM as people sitting on a bus. The first few seats are full. If you make a fuss and insist on sitting in the front seat, you need to first move everyone else down one seat.

If you’re trying to put an item at the beginning of an array with 5000 elements, you need to move down each of those 5000 elements one cell. This takes 5000 operations. This is bad.

Similarly, deleting is hard because you’ll leave an empty seat, and then you need to move everyone up a seat to fill the hole (remember, the fast index-lookup only works if the array is contiguous!). If you delete the first element of an array with 5000 elements, the remaining 4999 need to be moved up a spot, which takes 4999 operations. This is also bad.

But this is often necessary, and is done all the time in JS or ActionScript programs with the splice function.

You might have already realized how push is better. If you sit at the back of the bus, you don’t need to relocate everyone in front of you. So it’s actually a constant-time operation.

Of course, in a computer’s RAM, that cell might be occupied by the beginning of another array. If that’s the case, the interpreter needs to move things around. It’s unpleasant, but it only happens once in a while. So push occasionally takes a long time. But most of the time, it’s blazingly fast.

And that’s the reason why insert is slower than add in Scratch.

As an afterword, it’s worth mentioning that if you do lots of inserting and deleting, there’s a better way to store a list than an Array. It’s called a List. A List in CS is not the same thing as a List in Scratch.

A List consists of lots of pairs. A pair is a 2-element Array. The first element contains some data, and the second element is the address of the next pair (we can call this the “address pointer” because it points to the next pair).

The order in which the pairs are stored in memory doesn’t matter. So, when you want to insert something, you create a new pair anywhere in the RAM, and then change the address pointers to incorporate the new pair.

To delete something, you free the pair and fix the pointers. Fixing pointers is easy (just an assignment), so Lists are easy to mutate.

Of course, finding the 5000th element of a list would require you to follow 5000 address pointers (Lispers call it cdring down the list), so lookups are not constant-time anymore. Choosing the right data structure is important.

By the way, Snap! is extra-clever: it stores your lists as Lists or Arrays depending on how they were created. If you use Array-ey operations on them, they get converted to Arrays, and if you use List-ey operations on them, they get converted to Lists. If you want to be fast, you need to pick a style and stick with it. But that’s good programming practice anyway.