How to use the command line for screen capture tricks

Apparently it has recently become fashionable on Github READMEs to put in a screenshot of a tty rather than explain the usage in actual words. There’s nothing wrong with them for the most part, but what bothers me is that all these screenshots are ugly. The links above are in increasing order of beauty.

It turns out that taking nice screenshots is filled with icky pitfalls and undocumented secrets. Here’s how you do it right—on a Mac running a relatively recent OSX.

First of all, make sure you really want to use a screenshot. Plaintext is generally enough to convey what your project does, and all the text is copyable.

You should only be using a screenshot if your project has some curses-esque behavior—messing with colors and drawing and raw mode and all that jazz.

Finally: use small windows. It’s hard to read text if you take a screenshot of an enormous terminal window and shrink it down.

Most people know that you can use cmd-shift-4 to enter screenshot mode and select part of the screen. A lesser-known trick is that you can press “space” to enter window selection mode. This lets you click on a window to take a screenshot of that window; and you end up with this (click to enlarge): 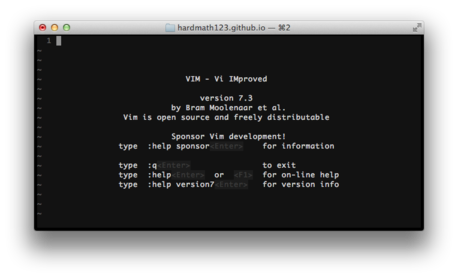 Why is this better than taking a normal screenshot and cropping? Because this method has the underlying code actually draw a fresh, high-resolution copy of your window—even in full-screen mode. It also includes that pretty shadow (which, by the way, is rendered with a translucent PNG alpha channel so it looks good on every background).

It’s also, to be honest, much easier for the lazy.

Surprisingly, this screen capture mechanism has a command-line API. Unsurprisingly, it has terrible documentation.

The command itself is called screencapture(1). You want to feed it the undocumented-in-the-man-page -w option to specify the window ID.

To get the window ID, you can use AppleScript’s tell app "$APPLICATION" to id of window $N command, where $N is the index of the window from “top” to “bottom”. You want to set $APPLICATION to Terminal and $N to “1” to get the focused window. Putting it together, we have:

This is, of course, terribly un-useful because it’ll take a screenshot of the window the moment you type this in. I would suggest prefixing it with sleep 5;, and running it in a separate window (not a separate tab—that would get captured in your output!). This gives you five seconds to switch to your target window and get ready for the screenshot.

Sometimes, you can only really show how your project works with an animated GIF.

In general, it’s good to keep GIFs short and small. They should loop cleanly: the easy way to accomplish this is by running “clear” at the end of your program so that the terminal state is restored to what it was before you ran it.

To make a GIF, you need to take multiple screenshots by looping screencapture(1) (you don’t really need a delay, since the process of capturing is so slow):

Then, you can use Imagemagick (brew install imagemagick) to stitch them into a GIF using the convert(1) command. Make sure you specify -alpha remove for each frame so that the shadows get rasterized properly:

This step will take a while and output a monstrously huge GIF, because the PNGs are pretty big. You can use Imagemagick -quality and -resize to shrink them substantially:

If you take screenshots often, it’s probably worth aliasing these commands in your ~/.profile.